Parkinson’s Disease is a neurodegenerative disorder that affects one million people in the U.S. and 10 million worldwide.

You’ll likely recognize these celebrities who received a Parkinson’s diagnosis—actor Alan Alda, Muhammad Ali, Pres. George H.W. Bush, Johnny Cash, Neil Diamond, Michael J. Fox, Billy Graham, Ozzy Osbourne, Linda Ronstadt, Charles Schulz (“Peanuts” comic strip), Robin Williams, and others. Yet this disease is also battled by those within our communities, our neighborhoods, and our own families. It does not discriminate but crosses into every demographic and people group.

Who can get Parkinson’s?

When a family member is diagnosed with it, relatives often ask: “Is Parkinson’s disease hereditary?” Those at risk include: 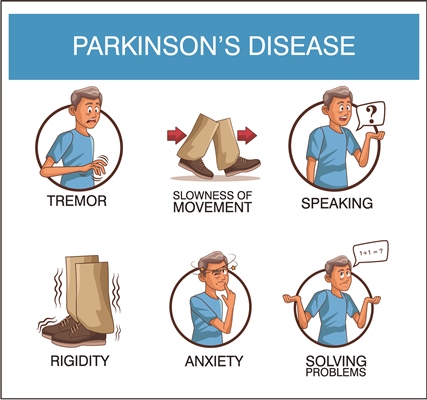 Parkinson’s occurs when nerve cells (neurons) in the brain wear out over time or even die. Neurons produce dopamine—a key chemical messenger in your brain. With fewer functioning neurons to produce adequate amounts of dopamine, abnormal brain activity is the result.

What are the signs of Parkinson’s?

The symptoms begin gradually over the years and vary from person to person. Early signs of Parkinson’s generally include:

To be diagnosed with Parkinson’s, a person must have bradykinesia and either tremor or rigidity. For example, bradykinesia may show up as a decrease in blinking or swinging the arms when walking. In addition, in the early stages, your face loses the ability to show expression, and speech becomes slurred or quiet.

As the disease progresses, these symptoms may occur:

Parkinson’s on its own is not fatal, but its complications may become serious.

Can Parkinson’s Disease be treated?

Even though there is no known cause or cure, treatment options may include medications and surgery. Physical, Occupational, and Speech Therapy can help manage physical symptoms.

Physical, occupational, and speech therapists are specially trained to evaluate and treat a variety of medical conditions, including Parkinson’s disease. Physical therapists help with body movements, strengthening balance, body alignment, and range of motion. At Glacial Ridge Health System, the therapists use the LSVT Big/LSVT Loud intensive exercise and speech therapy voice programs for people with Parkinson’s and other neurological disorders. The LSVT programs are proven to help individuals living with Parkinson’s—improving their communication, movement, and quality of life. Treatment is most effective for people in the early or middle stages of their conditions. Keeping a person’s voice and movements alive and strong when first diagnosed is easier than later restoring speech and movement after changes have become more noticeable.

If you are concerned that you or a loved one may have symptoms of Parkinson’s, contact your doctor for an appointment. Click the link to learn more about Parkinson’s Disease.

4 Common Carcinogens That Are Too Close to Home

One Patient’s Cancer Experience, Grateful for Comprehensive Care in Glenwood